We would like to thank everyone who attended this year’s CKDCF Fundraising Weekend; you all contributed to making it the best one yet, with an estimated £25,000 being raised!

The weekend began with a delicious buffet meal at the Seacote Hotel, St. Bees, on Friday evening. The meal was followed by an address from our founder, Francis Dunnery, who thanked a number of CKDCF 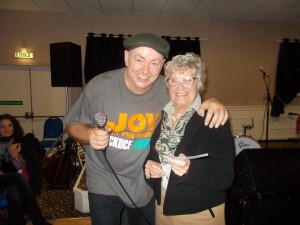 supporters, donors and fundraisers. Guests also heard speeches from representatives of the ‘West Cumbria Society for the Blind’ and ‘Cumbria Cerebral Palsy’, Marie Scott and Gill Wykes, respectively. Mrs. Scott and Mrs. Wykes spoke to the guests about how the work of the CKDCF had impacted children who receive support from their respective organisations. Their speeches received both tears and laughter. Subsequently, Francis presented Mrs. Wykes with a £3,000 cheque from the CKDCF for Cumbria Cerebral Palsy to continue their vital work in the county. 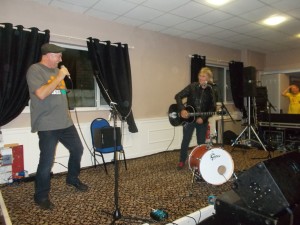 The evening continued with a 45-minute set from Mike Peters (of ‘The Alarm’), who, not only impressed existing fans, but also gained a number of new ones, after his impressive performance, which was filled with audience participation and great music! The evening was rounded off with a fantastic performance from Aquarian Nation artists and Cumbrian folk duo, John & Wayne, who played tracks from their new album – alongside the usual ‘classics’. John & Wayne were joined on stage by Danny Dunnery, Dorie Jackson and Francis Dunnery.

It was an early start on Saturday Morning for all those who were courageous enough to attempt to complete the CKDCF ‘Joy in the Rain’ Sponsored Walk around Ennerdale Water.

Prior to the 6.5 mile walk around the lake, all of the walkers gave a minute’s rapturous applause in memory of the late Peter Watson. The conditions of this year’s walk were said to be the most treacherous to date; yet all of our brave walkers (some more aptly dressed than others!) completed the whole circuit – albeit with waterlogged footwear and clothing.

Thanks to our valiant supporters, and their sponsors, the walk raised thousands of pounds for the health and wellness of children in Cumbria. 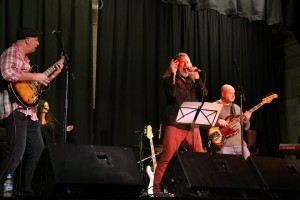 Once everyone had recovered from the morning’s walk, it was time for the main event of the weekend: the CKDCF Benefit Concert on Saturday evening. This year’s concert, which sold-out, featured the incredibly talented Robert Plant, alongside Big Big Train, Francis Dunnery and a number of other talented special guests. The concert was well attended, with audience members coming from far and wide to support the CKDCF. In addition to ticket sales, money was raised for the CKDCF through the use of collection buckets, a silent auction, a raffle, merchandise sales and t-shirt sales.

A gallery of photographs from the weekend can be found on our Facebook page.